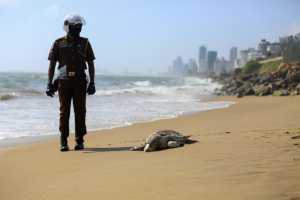 The Attorney General’s Department today informed the Colombo Magistrates’ Court  that 176 turtles had been killed.

The owners of the X-Press Pearl ship have agreed to pay an interim compensation to Sri Lanka to cover the cost of damage caused by the fire on the ship.

X-Press Feeders, operators of the container ship X-Press Pearl, have agreed to pay Rs. 700 million to cover the cost of compensation for fishermen affected by the fire.