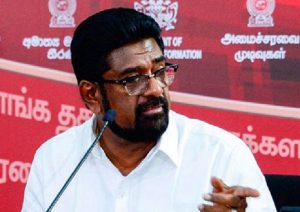 The Government today said that the decision to temporarily ban passengers from the Gulf was unavoidable.

Cabinet Spokesman, Keheliya Rambukwella told reporters that the matter was discussed with the Cabinet.

He said that the ban was enforced after over 100 Covid positive patients were detected from among the latest arrivals from the Middle East.

The National Operations Centre for the Prevention of the COVID-19 Outbreak (NOCPCO) had yesterday decided to temporarily ban passengers from Qatar, United Arab Emirates, Saudi Arabia, Oman, Bahrain and Kuwait.

Rambukwella said the Government had been accused in the past of allowing people to come from countries where the virus is spreading.

He said the decision to temporarily ban passengers arriving in Sri Lanka from some Gulf countries had to be taken to control the spread of the coronavirus in Sri Lanka.

NOCPCO had announced yesterday that passengers from the six Gulf Cooperation Council countries will not be permitted to disembark in Sri Lanka with effect from 0001hrs on 1st July 2021. The restriction will be in force until 2359hrs on 13th July 2021.

The proposal to ban passengers from the six Middle Eastern countries with effect from 1st July 2021 was taken earlier in the day yesterday.

However, officials had said that the proposal was put on hold for further discussions.

The proposal was later approved by the National Operation Centre for Prevention of COVID- 19 Outbreak. (Colombo Gazette)