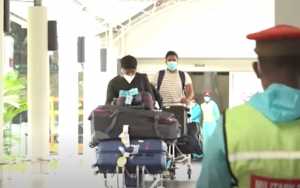 Sri Lanka cricketers Niroshan Dickwella, Kusal Mendis and Danushka Gunathilaka were sent to be quarantined at a hotel after they returned to the country today.

The three were flown home immediately from the tour of England after they admitted to breaching the team’s bio-secure bubble in Durham on Sunday night.

A video had emerged yesterday showing Mendis and Dickwella out in a public place. Gunathilaka was not seen in the video, but the three are believed to have stepped out together.

The touring players had been told categorically that they were not allowed to go towards Durham’s City Centre, but that is exactly where the trio have admitted to have gone, according to SLC officials.

In the video, shot from a vehicle, Mendis and Dickwella are seen looking around the square. Although both players have their masks handy, neither is wearing them.

It is as-yet unclear whether the three players had any contact with others within the bio-secure bubble upon their return from the excursion. (Colombo Gazette / ESPN Cricinfo)