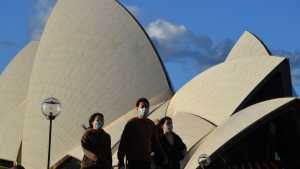 A Covid outbreak in Sydney linked to the highly contagious Delta variant has grown to 128 cases.

A small number of positive infections have also been recorded in the Northern Territory, Queensland and Western Australia.

This is the first time in months that cases have emerged in multiple parts of the country at the same time.

State and territory leaders will meet Prime Minister Scott Morrison on Monday for an emergency meeting.

Treasurer Josh Frydenberg said Australia is facing “a critical time” in its fight against Covid, as various states shut borders and enforced new restrictions to prevent further spread of the virus.

“I think we’re entering a new phase of this pandemic, with the more contagious Delta strain,” Mr Frydenberg told ABC News on Monday.

The escalation in Covid infections has prompted lockdowns in the cities of Sydney and Darwin, as well as restrictions across four states.

The situation remains most concerning in Sydney, where some 5 million residents are subject to a stay-at-home order.

The New South Wales (NSW) state government on Sunday expanded a lockdown to cover all of Greater Sydney, the Blue Mountains, Central Coast and Wollongong.

Many businesses and venues have been ordered shut.

NSW Premier Gladys Berejiklian on Monday reported 18 new cases, down from the 30 reported the previous day. Nearly 59,000 people had been tested in the past 24 hours.

While the two cases in Western Australia has been traced to the Sydney outbreak of the Delta variant, clusters in Queensland and the Northern Territory have been linked to people who became infected despite completing hotel quarantine.

The remote Northern Territory recorded four cases on Sunday, prompting a 48-hour lockdown in the capital, Darwin, and two other towns.

Meanwhile, Virgin Australia said on Sunday it had contacted passengers and crew on five recent domestic flights, after a crew member tested positive in Melbourne.

The outbreaks have prompted some inter-state and international border closures.

New Zealand paused its quarantine-free travel bubble with all of Australia until at least Tuesday because of the latest outbreak.

The travel corridor between the two neighbours was opened in April. Travel between New Zealand and specific Australian regions has been closed for short periods as outbreaks emerged, but this is the first time the bubble has been shut with all of Australia. (Courtesy BBC)