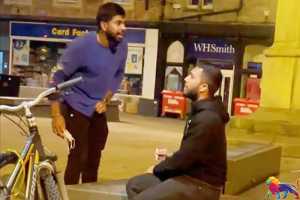 The three are being flown home immediately from the tour of England, but it is understood that the series is not in any jeopardy at this stage.

Overnight, a video had emerged showing Mendis and Dickwella out in a public place. Gunathilaka was not seen in the video, but the three are believed to have stepped out together. The touring players had been told categorically that they were not allowed to go towards Durham’s City Centre, but that is exactly where the trio have admitted to have gone, according to SLC officials. In the video, shot from a vehicle, Mendis and Dickwella are seen looking around the square. Although both players have their masks handy, neither is wearing them.

It is as-yet unclear whether the three players had any contact with others within the bio-secure bubble upon their return from the excursion.

“The players have been suspended pending a full inquiry, but have confessed to having gone out,” SLC vice-president Mohan de Silva said. “They are being recalled from the tour with immediate effect.”

Early indications from the SLC are that the board is viewing the breach as a serious offence.

This breach of Covid-19-related health protocols, and the consequent suspension, will substantially weaken a Sri Lanka side that had already been struggling on this tour. All three players were likely to be in Sri Lanka’s first-choice XI for the first ODI on Tuesday; with Avishka Fernando ruled out with a quadriceps injury, Sri Lanka have a very limited batting group available to pick from.

The team was already facing criticism for their woeful performance in the T20Is, where they were swept 3-0. None of the three had been good in the three matches. Mendis scored 54 across three innings, Gunathilaka made a total of 26 in three, and Dickwella hit 14 runs in his two outings to go with a barren run behind the stumps. They will now likely be subject to substantial criticism over their off-field behaviour.

The first of three ODIs against England is scheduled for Tuesday. (ESPN Cricinfo)