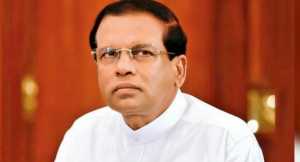 Former President Maithripala Sirisena has denied claims that he is to be appointed a Cabinet Minister.

Issuing a statement today, Sirisena said that there is no truth to claims he is to take oaths as a Minister over the next few days.

The former President said that he has not made any request to be given a post in the Government.

The statement also said that the former President is not expecting any ministerial post.

There were reports that Sirisena was to be given a ministerial post in a Cabinet reshuffle.

There is speculation that former Minister Basil Rajapaksa will be appointed as a Cabinet Minister next week.

Rajapaksa is expected to enter Parliament next week and then take oaths as a Cabinet Minister. (Colombo Gazette)