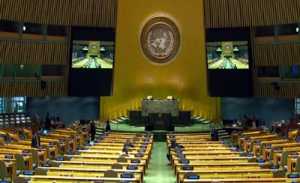 Unknown and also unacknowledged by Colombo and the nation’s strategic and diplomatic community, there is a lesson for Sri Lanka in the recent UN General Assembly (UNGA) vote on the situation in Myanmar.

The UNGA voted 191-1 with 35 abstentions, on the situation in Myanmar, in the aftermath of the military coup that was aimed at upturning electoral results that had given a second term for jailed pro-democracy leader, Aung San Suu-Kyi’s National League for Democracy (NLD).

What is even more important is the fact that all South Asian nations were among the nations that abstained. That included Bangladesh, with which Myanmar has continuing differences over the origins of the ‘Rohingya problem’ and more so, of taking back the million Rohingya refugees in the neighbouring country. It is noticeable that China did not vote against the resolution, along with Belarus, which was the only one in the category, but joined the relatively larger crowd of 35 nations that abstained. Another veto-power, Russia, too was in the second list, so did Sri Lanka, India, Pakistan and the rest of South Asian nations.

There is an obtrusive yet object lesson for Sri Lanka in this. That is in given conditions, the world is ready to gang up against one of the so-called, self-styled underdogs, its big and supportive neighbours notwithstanding. That the UNGA went ahead with the vote despite the Indian PR, T S Tirumurti, in particular, highlighting the ongoing ASEAN initiative on Myanmar, which needed to be given a chance, should be an eye-opener to Colombo, as to who really calls the shots in the UNGA –- not certainly its dear friend China.

The UNGA has 193 members. Without abstentions and absence, a two-thirds majority requires 128 votes – or, just 11 more than what the Myanmar resolution obtained. Of course, both these figures are much less than the 143 votes that Maldivian Foreign Minister Abdulla Shahid obtained while being elected UNGA President, earlier this month. Both China and Pakistan reportedly backed Shahid’s contestant, former Afghan Foreign Minister Zalmai Rausool. He could get only 48 votes.

The lesson is that a two-thirds majority in the UNGA is not such a huge-hurdle for a determined group of nations to push through, for a make-or-break vote. Whether on Afghanistan’s UNGA poll campaign, or the Myanmar resolution, China has proved that it cannot upturn the global verdict.

That is to say, even if Myanmar had met with whatever conditions that China may have laid for its outright support, it would not have been able to defeat the UNGA resolution. Read with Sri Lanka’s successive UNHRC vote-defeats from 2012 to this very year, and Colombo should be alive to existential realities, which had help the nation in the very first year only with a ‘honourable defeat’, not an outright victory that it may have hoped with Beijing’s backing.

It is in this background that the nation needs to look at the EU vote, threatening the denial of GSP-Plus duty-facility, aimed at helping Sri Lanka’s exports trade — as with other Third World nations, too. The terms are too strong, the resolution, mostly unacceptable for any sovereign nation with a legal and judicial system of its own, where electoral democracy, as acknowledged by the modern world, remains mostly unblemished.

But when it is a game of numbers, the nation may still stand to lose. It is more so and even more frequently in the UNHRC, but a similar possibility at the UNGA cannot be ruled out, if and when it came to that. That the UNHRC Establishment is after the nation became further clear from the more recent bi-annual report of Human Rights Commissioner, ‎Michelle Bachelet, to the 47-member Council, again this month.

So has the ‘Core Group’ that moved the UNHRC resolution earlier and got it passed. As may be recalled, this resolution in particular empowers the Office of the High Commissioner to evaluate not only progress made or not made on the past resolutions, viz, allegations of war crimes and other rights violations. It also permits a continuing assessment of ‘ongoing violations’.

It is in this context, the nation needs to view the condemnation of the presidential pardon granted to ruling party politician, Duminda Silva, against whom the Supreme Court had confirmed death sentence. The case pertains to Duminda and others quarrelling with fellow-party man, Bharatha Lakshman Premachandra, in the midst of the 2011 local council poll campaign.

By all accounts, the presidential pardon for Duminda Silva is unpardonable. The cruelty of the killing and the subsequent court appearances and television news briefings by the slain man’s young daughter, Hirunika Premachandra, touched every viewer’s heart. So much so, when she decided to join the rival UNP, as if in need of political protection after fighting the then Rajapaksa Establishment, legally, she won a parliamentary seat from Colombo district in 2015.

At present, Hirunika is an MP from the breakaway SJB, against the Rajapaksa sweep of last year, showing that her earlier electoral victory was only a ‘sympathy vote’ that would not wash for long.  Though Hirunika may have blotted the copy-book during her first term as MP, the chances are that the Duminda release may have also catapulted her back to the centre-stage – that is, if she still wants to stay there.

All this is beside the point. What should be of concern is the immediate US and UNHRC reaction to the presidential pardon for ‘killer’ Duminda. In a nation, where a five-judge Bench of the Supreme Court has unanimously confirmed the death-sentence awarded by the lower court, and yet, the death-sentence almost automatically gets converted into a sentence for life, despite former President Maithripala Sirisena, lifting the technical ban on ‘executions’, it is anybody’s guess why incumbent Gotabaya Rajapaksa should rush through it all, using a Buddhist religious function, ‘Poson Poya’ as a kind of cover for the purpose.

In the process, President Gota may have blotted the copy-book. That is because his good intention to grant pardon to 93 prisoners has gone waste. Included in the list were 16 Tamil ‘political prisoners’, and there release was expected to set the right tone for reopening talks with the TNA, and possibly other Tamil political parties, to find the elusive solution to the ethnic issue.

This is so despite a section of the Tamil critics of the Rajapaksas crying ‘cheat’, saying that most of those that have been freed now have less than a year to complete their sentence. They want another 70-odd ‘political prisoners’, too, released. According to some media reports that too may happen sooner than later. But then the Duminda pardon has pushed them all out of everyone’s consideration.

Yet, it is not as unpardonable as the West wants to make it out to be. Maybe, the choice was wrong, the timing even more, but then under the Sri Lankan Constitution, the President is well within his powers to grant pardon to anyone whom he chose – without assigning reason. Put on the reverse, it is like Sri Lanka or another tiny nation challenging the US President or the EU Parliament, on their decisions. Pushed to the wall, they all can expect an ‘offended’ nation doing precisely that, even though it may not, need not and should not be Sri Lanka.

If that is a problem area, may be even now, Hirunika or her victimised family members, starting with her mother, could still move the Supreme Court, asking the simple question: “Is the constitutional powers of the President, to grant pardon for prisoners, subjective or has to be objective?”

From among the Commonwealth nations, the Indian Supreme Court had the opportunity to decide on the issue, over granting presidential pardon for Indira Gandhi’s assassins. The court after much deliberation held that the President of India’s powers in the matter had to be ‘objective’, and cannot be ‘subjective’.

That is to say, no incumbent President can grant pardon to any death-row inmate just because he likes the man’s face. Instead, such pardons should be qualified to be upheld by the higher judiciary, if challenged. That’s to say, at least in India, the President’s power to grant pardons is justiciable – and can be challenged before the Judiciary. Sri Lanka does not have a precedent of the kind –- maybe, this one can still become !