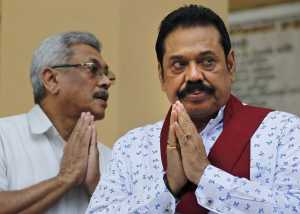 The UNP said that the President had claimed that the economy had been well-managed during the time of President Mahinda Rajapaksa.

“If this is correct, why has he chosen to remove the powers from Prime Minister Mahinda Rajapaksa, under the 20th Amendment, and empower P.B. Jayasundera to run the economy. Does the President not have faith in his own Prime Minister and Cabinet of Ministers?” the UNP asked.

The UNP said that President Gotabaya Rajapaksa’s speech on Friday (25) did not address the issues facing the public.

“He used this nationally televised address as an opportunity to present excuses for why he and his Government have failed, while blaming the people of Sri Lanka,” the UNP said in a statement.

The UNP said that there are numerous problems facing the country, including the growing threat of COVID-19, the collapsing economy, fertilizer shortages, disruptions to schooling and the rising cost of living.

“The President did not address any of these concerns. He instead made excuses as to why he has been unable to solve these problems while avoiding explaining his failure to implement any of the promises made in his manifesto,” the UNP said.

The UNP said the people had looked to the President to provide leadership and hope in these difficult times, but he had failed them miserably instead blaming them for his own shortcomings.

“The failure by the Government to control the spread of the COVID-19 virus, and the delay in implementing the vaccination program, has forced the country to undergo sporadic lockdowns. The lockdowns cause grave financial burdens for the public. These could have been avoided if the advice of the medical professionals had been followed,” the UNP added.

The UNP also said that the President’s remarks about the state of the economy during the period of 2015-2019 are wrong.

“At the time of the UNP handing over the Government in 2019 the country had US $7.6bn in foreign reserves. As of today, the foreign reserves have fallen to less than US $4bn. This Government has no plan on how to increase the reserves and deal with the pending loan repayments,” the UNP said.

Overall, the UNP said that the President, in his speech last week spanning 69 minutes, demonstrated a complete lack of direction. (Colombo Gazette)