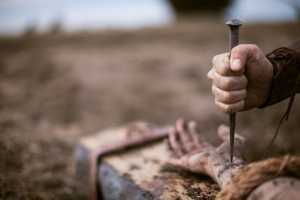 Two individuals had been abducted and nailed on a cross in Ampitiya over a post published on Facebook, the Police said.

The Police said that the two individuals had published a defamatory post on Facebook with regards to a man who operated a Temple.

The suspect had brought the two individuals to his house and later took them to an area in Ampitiya.

Police Spokesman, Deputy Inspector General (DIG) Ajith Rohana said that in Ampitiya the two people were tortured and nailed on wood similar to nailing on a cross.

DIG Ajith Rohana said that a 44-year old man and a 38-year old man have been admitted to the Kandy hospital for treatment.

The suspect and his accomplices are evading arrest.

The Balagolla Police and Kandy Police are investigating the incident. (Colombo Gazette)