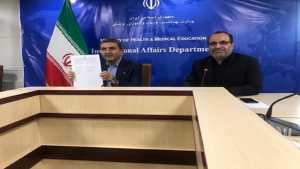 Following over 2 years of continuous negotiations with Bharat company for joint cooperation in the field of rotavirus vaccine, the MOU was signed by Alireza Biglari, head of the Pasteur Institute, and Krishna Ella, director of Bharat Biotech in a virtual meeting on Thursday.

With this measure, a very effective step will be taken in reducing the number of outpatient and inpatient cases in children.

At the meeting, both sides expressed their readiness and interest in developing relations in the field of health and joint production of vaccines.

Ali Chegni, Iranian Ambassador to India, praising the company’s capacities, stressed the need to strengthen cooperation between the two countries for joint production of vaccines.

Infection by rotaviruses is one of the major causes of childhood diarrhea with an associated high mortality rate (440,000 deaths/year) and is responsible for 25 million medical visits and 2 million hospitalizations every year, especially during the cold season.

The prevalence of rotavirus infections in Iran has been estimated as 30 -50 percent while the mean prevalence is reported to be 39.9 percent. According to a WHO report, in Iran, 42 percent of gastroenteritis are caused by rotaviruses which are estimated to have inflicted approximately 2000 and 270 deaths in 2008 and 2013, respectively.

This pattern indicated that the rate of rotavirus-caused diarrhea for Iranian children is similar to the rate in the Eastern Mediterranean region. The prevalence of rotavirus infection is varied in different regions of Iran. For instance, this rate is 6.3 percent for Birjand in South Khorasan province and 79.2 percent for Tehran. (Tehran Times)