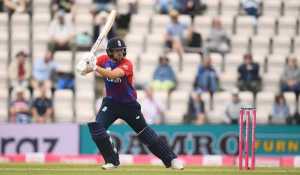 England completed a 3-0 clean sweep over Sri Lanka in the T20I series with a crushing 89-run victory at the Ageas Bowl. It was the fourth-largest victory margin in terms of runs England have achieved in the format.
Despite the loss of both regular openers to injury, England posted a century stand for the first wicket to grasp a firm hold on the match which they were never to relinquish. Dawid Malan was named Player of the Match for a fluent innings of 76 that belied the slow nature of the pitch. Jonny Bairstow made 51. Nobody in the rest of the match passed 20.
England lost their way a little towards the end of their innings. An excellent spell of death bowling from Dushmantha Chameera, a bright spot amid the rubble of a bitterly disappointing Sri Lanka performance, saw England lose five wickets for 19 runs between the 16th and 19th overs. Chameera finished with career-best figures of 4 for 17.
Chris Jordan, however, helped England plunder 17 from the final over of the innings to take them to a total that was always likely to prove beyond the reach of a side that had failed to reach 130 in either of the first two games in the series.
So it proved as England’s seamers, gaining a degree of lateral movement that is unusual with the white kookaburra ball, combined to bowl Sri Lanka out for just 91. It was the fourth lowest score Sri Lanka have made from a completed T20I innings.
Chris Woakes, Sam Curran and Jordan took 4 for 36 from their 12 overs combined, while David Willey picked up three wickets.
With Jason Roy suffering from a tight hamstring, Moeen Ali was recalled to the T20I side for the first time since September 2020. But he was consigned to a peripheral role by the dominance of England’s opening batters and the excellence of their seamers.
Sri Lanka also made a couple of changes. But Oshada Fernando, who took 27 balls over his 19 runs and seemed preoccupied with trying to hit almost everything through the leg side, underwhelmed and Lakshan Sandakan was unable to make any inroads with his left-arm legspin. Avishka Fernando was absent through injury.
Given that England went into this series without two first-choice players (in Ben Stokes and Jofra Archer) and lost Jos Buttler to a calf injury along the way, this result would seem to confirm their place among the favourites for the T20 World Cup in a few months. It is harder to find room for optimism for a Sri Lanka side that succumbed to their first clean-sweep defeat in any limited-overs series (of at least three matches) against England. (Courtesy ESPN Cricinfo)
Post Views: 56