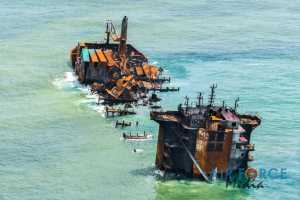 The owners of the X-Press Pearl ship have agreed to pay an interim compensation to Sri Lanka to cover the cost of damage caused by the fire on the ship.

X-Press Feeders, operators of the container ship X-Press Pearl, have agreed to pay Rs. 700 million to cover the cost of compensation for fishermen affected by the fire.

Meanwhile, X-Press Feeders said that caretaker salvors continue to observe a grey sheen emanating from the wreck but it has lessened over the last week.

“They remain onsite on a 24-hour watch to deal with any possible debris and report any form of a spill. A specialised salvors tug has arrived from Malaysia to take over the caretaker duties and drones have been flown in and will be deployed onsite to help with the ongoing monitoring activities.Representatives of ITOPF and Oil Spill Response are monitoring updates from the scene and are ready to deploy in case of any reported spill,” X-Press Feeders said.

The ship operators also said that discussions are underway to provide the initial payment of funds to help compensate those affected by the consequences of the fire and resulting pollution and help cover clean-up costs.

“We continue to make machinery available for shoreline clean up but remain limited by the current Covid-19 lockdown in deploying manpower,” X-Press Feeders said.

​A seafarer injured during the vessel’s evacuation will be released from hospital tomorrow and join fellow crewmembers at a local hotel. Meanwhile, select crew continue to assist Sri Lankan police with the investigation into the incident.

Eight containers with cargo had fallen into the sea after which debris and packages had washed ashore along the coast from Colombo- Negombo.