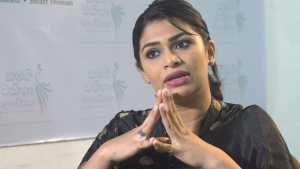 Hirunika Premachandra, the daughter of murdered politician Bharatha Lakshman Premachandra, has raised concerns over the security of her family following the release of Duminda Silva.

Premachandra told the BBC that she and her family fought a long legal battle to bring those responsible for her father’s death to justice.

“We fought a long legal battle to bring those responsible for my father’s death to justice. Now the President has given a pardon. How can people trust the judicial system now? We are now worried about our security,” she said.

Duminda Silva was found guilty with four others of shooting dead Bharatha Lakshman Premachandra and three of his supporters during local elections in Colombo in 2011. The two men were both members of the then governing party. The verdict was later upheld by the country’s Supreme Court in 2018.

Silva was granted a presidential pardon this week.

“In this country, we are now being treated like slaves. I have written to the president (Mr Rajapaksa) saying he’s dragging us to hell,” Ms Premachandra, also a former MP, said.

The UN and human rights groups have criticised President Gotabaya Rajapaksa’s decision to pardon the convicted murderer, warning it undermines the rule of law. (Colombo Gazette)