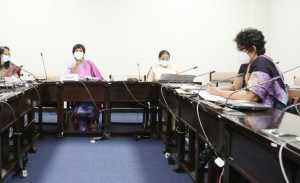 It was decided at the Women Parliamentarian’s Caucus to submit a proposal in writing to the Parliamentary Select Committee on election law reforms in order to ensure 30% -70% representation of women at the Parliamentary and Provincial levels within the existing electoral structure of the country.

In addition, it was also decided to propose to ensure that the 25% quota of votes at the local government level remains unchanged and to add to the electoral rules that all political parties allocate 50% of the national list to women.

The Women Parliamentarian’s Caucus also discussed proposals to increase the representation of women in all commissions and boards, as well as to provide leadership positions, committee positions, executive positions and committee membership within the hierarchy of the main party structure.

Enactment of adequate legislation to reduce election violence, the imperativeness of all female Parliamentarians declaring their assets and liabilities annually, providing women with a definite number of nominations if they wish to change the old preference system were also discussed in detail at this meeting.

It was decided to further discuss with regards to the proposals made by the female Parliamentarians and referred to the Parliamentary Select Committee on election law reforms chaired by Minister Dinesh Gunawardena.