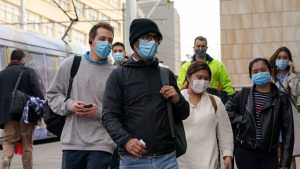 Parts of Sydney’s central and eastern suburbs, including Bondi Beach, will be locked down after a jump in Covid cases.

The city is battling to contain an outbreak of the highly infectious Delta variant.

It is the first lockdown in Australia’s largest city – home to 5.3 million people – this year.

It will affect the city centre, inner-city suburbs, as well as beachside suburbs in the east.

From Saturday, residents who live or work in those areas have to stay at home except for essential reasons. The lockdown will be enforced until 2 July.

“We understand this is a difficult time for everyone, however we need to take these steps now to get on top of this outbreak,” the New South Wales government said.

Sydney’s current outbreak marks its most significant rise in Covid transmission since December. For most of the year, locals have enjoyed almost no restrictions on daily life.

The cluster of infections emerged just a week ago in Bondi, the famous beach suburb, but has since spread into the city centre and to its western fringes.

It has been linked to a driver who transported international arrivals from the airport.

Australia has enacted strict border closure and quarantine measures since March 2020 to keep the virus out of the country.

However, more infectious airborne strains of the virus – such as the Delta and Alpha variants – have increasingly breached the defences of the quarantine system, which is largely run out of hotels in state capitals.

Since November, more than eight lockdowns have occurred in various state capitals across Australia including Melbourne, Brisbane, Perth and Adelaide.

Authorities in Sydney had previously steered away from citywide lockdowns. In December, it locked down the city’s northern beaches district following an outbreak of about 150 cases there.

The latest outbreak has also sparked criticism over the slow pace of Australia’s vaccination rollout – a responsibility of the federal government.

So far, just 3% of the adult population has been fully vaccinated and about 25% of Australians have received a first dose. (Courtesy BBC)