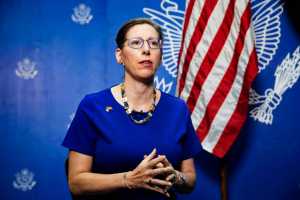 The United States (US) today accused Sri Lanka of undermining the rule of law with the release of convicted murderer Duminda Silva.

The US Ambassador to Sri Lanka, Alaina B. Teplitz said that while the US welcomes the early release of prisoners arrested under the Prevention of Terrorism Act (PTA), the pardoning of Duminda Silva undermines the rule of law.

“We welcome the early release of PTA prisoners, but the pardon of Duminda Silva, whose conviction the Supreme Court upheld in 2018, undermines rule of law. Accountability and equal access to justice are fundamental to the UN SDGs to which the GoSL has committed,” the US Ambassador tweeted.

As a result Duminda Silva was set free today on a presidential pardon.

The Prisons Department also freed 93 prisoners on a presidential pardon.

The Prisons Department said that the inmates released included 16 former LTTE cadres who had been detained under the PTA. (Colombo Gazette)