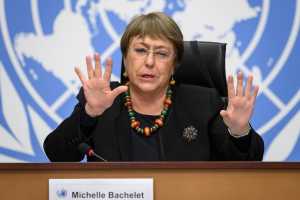 The United Nations (UN) says the presidential pardon of Duminda Silva is another example of selective, arbitrary granting of pardons in Sri Lanka.

The Office of the UN High Commissioner for Human Rights, Michelle Bachelet said that arbitrary granting of pardons weakens the rule of law and undermines accountability

“Presidential pardon of Duminda Silva, a former MP convicted of the murder of a fellow politician, is another example of selective, arbitrary granting of pardons that weakens rule of law and undermines accountability,” the Office of the UN High Commissioner for Human Rights said.

The Prisons Department said that it had received the documentation from the President’s Office to free Duminda Silva on a presidential pardon. As a result Duminda Silva was set free today.