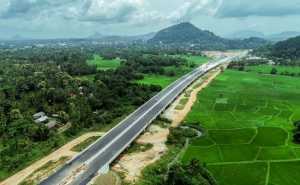 Two people were killed after illegally entering the Central Expressway which is under construction.

The Police said that the two people had entered the expressway on a motorcycle.

According to the Police, the two people had been racing on the expressway and crashed into a car.

The Police said that the two people aged 19 and 24 were killed in the accident.