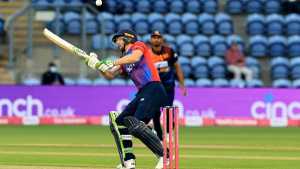 England took a one-nil lead in the T20I series against Sri Lanka with a comfortable eight-wicket victory in Cardiff achieved with 17 deliveries to spare.

A much-changed Sri Lanka side – there were six alterations from their previous T20I in March – never really got to grips with the variation and control of the England attack or a slightly sluggish surface that rendered strokeplay tricky. At one stage they went 10 overs (from 4.2 to 14.1) without hitting a four and there were just three sixes in their innings.

Eoin Morgan, the England captain, appeared to have an almost endless array of options and variations on hand in the field. And with Adil Rashid producing the third most economical four-over spell of his T20I career (he conceded 17) and Chris Woakes (three overs for 14) and Liam Livingstone (two overs for nine) adding equally miserly support in conceding just one boundary between them, Sri Lanka never looked to be on course for a competitive total.

While Dasun Shanaka, with his second T20I half-century, helped Sri Lanka plunder 25 off the final two overs of the innings to drag his side to something approaching respectability, only one of his colleagues, Kusal Perera, made 20 and Sri Lanka only took their run-rate above a run-a-ball in their penultimate over.

That left England chasing a modest 130 for victory. And even without the injured Ben Stokes, that was unlikely to test the side ranked No. 1 in the world in this format.

Jos Buttler and Jason Roy, took 61 from the powerplay to all but end the game as a contest. If Buttler, timing the ball beautifully both through and over the off side, was the more pleasing on the eye, Roy was no less effective as he thrashed through the leg side. It was some surprise when he was brilliantly caught attempting to flay one over mid-off.

By then, though, the openers had added 80 from 55 balls. And while Dawid Malan (seven off 14) was unable to get into his stride, Buttler brought up a 38-ball half-century by taking 10 off two deliveries from Akila Dananjaya – a pulled six followed by a drive for four – and ensured England cruised over the victory line with quite a bit to spare. (Courtesy ESPN Cricinfo)
Post Views: 54