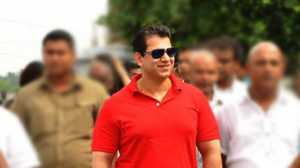 As a result Duminda Silva was set free today on a presidential pardon.

A petition was also signed last year by several Government Parliamentarians seeking a pardon for Silva.

Bharatha Lakshman Premachandra and his bodyguards were murdered in October 2011 ahead of elections held at the time.

Duminda Silva was also injured in the incident and he sought treatment overseas but he was later accused of being involved in the killing. (Colombo Gazette)