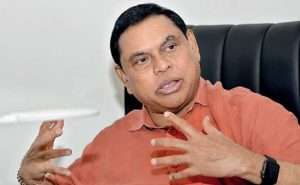 Chairman of the Special Presidential Task Force of Economic Revival and Poverty Eradication and National Organiser of the Sri Lanka Podujana Peramuna (SLPP), Basil Rajapaksa, returned to the country today.

Basil Rajapaksa left for the US in May on a private visit, leading to various speculations.

However, there was also speculation that he left following a rift with his brothers in the Government.

The Government had however dismissed speculation of a rift among the brothers. (Colombo Gazette)