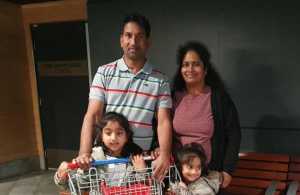 A Sri Lankan Tamil family that has spent years in offshore detention has been issued bridging visas that will allow them to work and study on the Australian mainland.

The decision comes after the Murugappan family was recently moved into community detention in Perth, where youngest child Tharnicaa has been receiving medical treatment.

“This decision allows three members of the family to reside in the Perth community on bridging visas while the youngest child’s medical care, and the family’s legal matters, are ongoing,” he said in a statement.

“The family will continue to have access to health care, support services, housing and schooling in the Perth community.”

The Murugappans had settled in the Queensland town of Biloela but were removed in 2018 after a court found they were not owed protection.

Wednesday’s decision by the minister allows the two parents to work and study in Perth.

The Murugappan family has spent years fighting deportation to Sri Lanka, after they were found not to be owed protection in Australia.

Supporters have been urging the federal government to allow the family to return to the Queensland town of Biloela, where they had been living before being placed in immigration detention in 2018.

Four-year-old Tharnicaa was recently released from hospital after being medically evacuated from Christmas Island to Perth with a blood infection.

Family friend Angela Fredericks questioned why Tharnicaa had not been granted a bridging visa like the other members of her family, saying it meant the family could not leave Perth.

“While we welcome Priya, Nades, and Kopika being granted bridging visas, we wonder what precisely is the minister’s objective in denying little Tharni one,” she said in a statement released by Change.org.

“This family must stay together, and they need to be back in Biloela as soon as humanly possible.”

The visas do not guarantee the family will be allowed to stay in the country long term.

Shadow Home Affairs Minister Kristina Keneally said she hoped the decision was the “next step” towards allowing the family to return permanently to Biloela.

“Australians will welcome the news today that the minister is personally intervening in the Biloela family’s case and using his ministerial discretion to grant bridging visas to Nades, Priya and Kopika,” she said.

“It’s welcome that the family is not under those strict detention conditions. Nonetheless, they are not able to travel to Biloela, whilst the minister is maintaining that Tharni must stay in Perth.” (Courtesy ABC News)