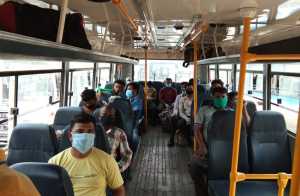 The Police are to crackdown on shops and public transport violating the quarantine laws.

According to the Police, a number of shops and public transport were found to have violated the quarantine laws yesterday (Tuesday).

DIG Ajith Rohana said that the Police will initiate legal action against individuals and institutions found to have violated the quarantine laws.

He said that institutions and shops must ensure that the public maintain social distancing and wear face masks when entering the premises.

DIG Ajith Rohana said that legal action will be taken against drivers and owners of public transport who violate the quarantine laws.

Public transport resumed on Monday while selected stores were also allowed to operate by following the health guidelines.

The travel ban was lifted on Monday 21 June and will be reimposed tonight and lifted again on 25th June.

The travel ban will be reimposed at 10pm tonight and lifted again at 4am on 25th June. (Colombo Gazette)