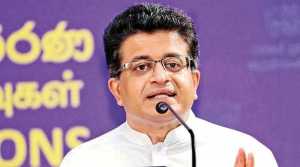 A no-confidence motion was presented to Parliament today against Energy Minister Udaya Gammanpila.

The motion was presented by the opposition Samagi Jana Balawegaya (SJB).

SJB General Secretary Ranjith Madduma Bandara said the motion was presented accusing the Energy Minister of being responsible for the fuel price hike.

Madduma Bandara said that the support of the Tamil National Alliance and the Janatha Vimukthi Peramuna will be sought for the motion.

The SJB is hopeful that some members in the government will also vote in support of the motion.

Back-door negotiations are expected to take place to obtain the support of the SLPP MPs who have objected to the fuel price hike.

SLPP General Secretary MP Sagara Kariyawasam is among those who have openly blamed Gammanpila for the fuel price hike.

However Gammanpila had said that President Gotabaya Rajapaksa, Prime Minister Mahinda Rajapaksa and the Cabinet sub-committee on the cost of living, which includes Minister Namal Rajapaksa, had approved the fuel price hike.

He had also said that the fuel price hike is a matter which comes under the purview of the Minister of Finance. (Colombo Gazette)