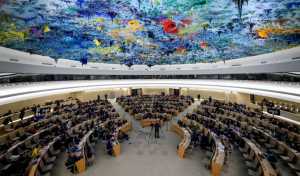 The Core Group on Sri Lanka at the UN Human Rights Council has expressed regret over the lack of progress on key issues.

The concerns were expressed in a statement issued on behalf of Canada, Germany, North Macedonia, Malawi, Montenegro and the UK.

UN Human Rightc Council resolution 46/1 called upon the Sri Lankan Government to address the harmful legacies of war and to protect human rights, including for those from religious minorities.

“We regret the lack of progress on these issues, with a number of further concerning developments. The Sri Lankan Government has attempted to dismiss a number of emblematic cases and to initiate criminal proceedings against individuals pursuing some of these cases. This counters the Council’s call for prompt, thorough and impartial investigations. We call for former CID director Shani Abeysekera’s safety to be ensured,” the Core Group on Sri Lanka said.

The Core Group said it is deeply concerned about the ongoing use of the Prevention of Terrorism Act and the recent intention to introduce a rehabilitation process lacking adequate judicial oversight.

It said that human rights lawyer Hejaaz Hizbullah, and poet and teacher Ahnaf Jazeem, remain detained without trial and further arrests under this Act have continued, including among minority communities and the political opposition.

“We remain concerned about the restrictions on memorialization. We join the Bar Association of Sri Lanka in requesting independent and impartial investigations into recent deaths in police custody We are concerned over appointments to the Office on Missing Persons and reiterate the importance of ensuring independent and credible institutions to achieve justice,” the Core Group on Sri Lanka said.

The Core Group on Sri Lanka encouraged Sri Lanka to cooperate with the Council and OHCHR in relation to resolution 46/1 adding that it stands ready to support the process. (Colombo Gazette)