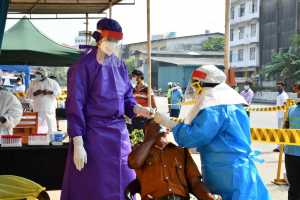 Twenty-nine (29) people have been found to be infected in Narahenpita from a total of 302 people detected with the coronavirus in the Colombo District yesterday (Sunday).

Officials said 63 people were detected with the coronavirus in the Colombo Municipal Council -limits in the 24-hour period ending at 06 am today.

Eight cases were reported from Wellawatte, while five were from Fort and three each from Hulftsdorp and Mattakkuliya.

Two cases each were detected in Slave Island, Bambalapitiya, Borella, Maradana, and Grandpass.

Officials said one Covid infected person was found in the Dematagoda area in which the highly transmissible Indian / Delta variant of the coronavirus was recently detected.

One Covid case each was also detected from Colpetty, Cinnamon Gardens, Pettah, and Bloemendhal.

From the remaining areas of the Colombo District, 33 cases were found in Hanwella, 28 in Kosgama, 21 each in Avissawella and Mount Lavinia, and 20 in Piliyandala.

Seventeen cases each were detected in Kahathuduwa and Nawagamuwa, while 15 cases were found in Padukka.

Eight infected people were reported from Meepe, seven from Maharagama, six each from Wellampitiya, Dehiwala, and Egodauyana, and five each from Thalangama and Welikada.

Parts of Colombo to be without water on Saturday, Sunday