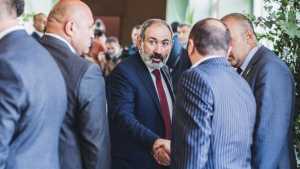 Preliminary results suggested Mr Pashinyan’s Civil Contract party was in the lead with 58% of the vote.

The vote was called in the wake of Armenia’s defeat in a conflict with Azerbaijan over the territory of Nagorno-Karabakh.

Armenia lost swathes of territory in the war, which lasted for six weeks last year and cost thousands of lives.

Declaring victory early on Monday morning, Mr Pashinyan urged supporters to gather in the main square of the capital Yerevan in the evening.

“We already know that we won a convincing victory in the elections and we will have a convincing majority in parliament.”

Almost 50% of the country’s 2.6 million eligible voters cast ballots on Sunday, Armenian election officials said, adding that the vote was carried out in accordance with legislation.

Mr Kocharyan’s alliance said it would not recognise Mr Pashinyan’s claim of victory, which was made when 30% of precincts had been counted.

“Hundreds of signals from polling stations testifying to organised and planned falsifications serve as a serious reason for lack of trust,” the bloc said in a statement.

On Sunday evening the general prosecutor’s office said it had received 319 reports of violations, and had opened six criminal investigations. All of these were related to alleged bribery during campaigning.

Mr Kocharyan, a friend and ally of Russian President Vladimir Putin, was himself previously accused of fixing a presidential election in favour of a political ally.

He was also accused of presiding over a deadly crackdown on protesters in 2008.

Mr Pashinyan came to power after leading a popular revolution in 2018, and Armenia was praised by some international countries when it held its first free and fair election under his leadership that year.

But the country has been in a political crisis since November 2020, when Mr Pashinyan signed a Moscow-brokered truce with Azerbaijan to end the Nagorno-Karabakh war.