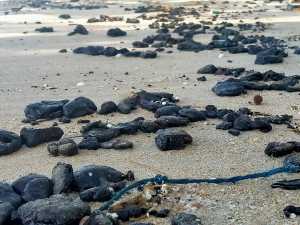 A large amount of tar balls found in Phuket is believed to be linked to the MV X-Press Pearl ship which sank in Sri Lankan waters.

A major cleanup operation is underway along the Naiyang Beach in Phuket after tar balls were found today.

Environmentalists in Phuket said that drone cameras detected oil floating in the water close to the beach where tar balls were found.

The MV X-Press Pearl caught fire in Sri Lankan waters last month while being anchored near the Colombo harbour.

Several containers on the ship fell into the sea polluting the water and resulting in large amounts of debris being washed ashore.

The ship eventually sank after the fire lasted for several days resulting in further damage to the marine environment.

The United Nations (UN) is to submit a report on the impact to the environment in Sri Lanka as a result of the MV X-Press Pearl disaster.

A UN team of oil spill and chemical experts, provided by the European Union (EU), is working with the Sri Lankan Government to assess the impact on the environment caused by the MV X-press Pearl disaster.

The team from the UN, France and Italy is a collaboration between the humanitarian arm of the European Union (EU ECHO/ERCC) and the United Nations Environment Programme (UNEP) / Office for the Coordination of Humanitarian Affairs (OCHA) Joint Environment Unit.

An independent UN report on the incident will be produced with key findings and recommendations on short-term response measures and longer-term recovery planning and submitted to the Government. (Colombo Gazette)