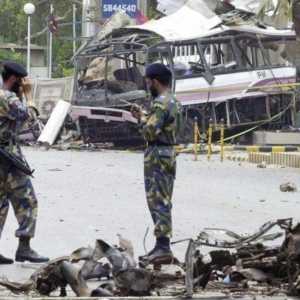 Pakistan’s image as a terror sponsor came into sharp focus when France recalled the killing of 11 French nationals in Karachi on May 8, 2002, with anger and sadness.

The French citizens were working on a French-Pak submarine project in Karachi when they were targeted by terrorists sponsored by a cabal of middle-men, Generals and politicians in Pakistan who were angry at not receiving the bribe they were promised.

Although Pakistan was quick to label the suicide bombing as an al Qaeda attack, the French investigators subsequently were able to discover clear evidence of the ISI’s direct involvement in the bombing.

A reputed and widely read French newspaper, Le Monde, on May 20 and 21 this year, published a damning two-part series on the Karachi attack, confirming the ISI’s role in the Karachi bombing. The articles have put Pakistan in a tight spot regarding its role in carrying out terrorist acts. The articles exposed the role of a highly influential group of non-state actors, supported by the state, especially Pakistan Army, in sustaining terrorism in the region, and in the world.

It is now becoming clear to the world that Pakistan, under the ruse of supporting the global war on terrorism, was in fact creating a rogue state within a state which used terrorist groups to punish own citizens, create violence and mayhem in the immediate neighbourhood and blackmail the international community.

In France, the attack ruined many young and old dreams, destroyed a dozen families and, over the years, kept the wound alive and searingly painful for the whole of France. Even nineteen years after the incident, there is no closure for the families. This year too, family and friends remembered their loved ones with tears in their eyes and anger in their hearts. They were angry that not one person till date had been charged with wilful murder in such a diabolical plot extending from Paris to Karachi. The two `terrorists` arrested and tried by Pakistan turn out to be a fraud–a local high court freed the accused for lack of any evidence.

The truth was more wicked as few tenacious investigators in France discovered–the attack was masterminded by a group of Pakistani military officials, arms merchants and political leadership in France over commissions promised for the submarine deal. It was like scratching a raw wound. The families of the dead were stunned, so was the world. The extent to which Pakistani generals and their allies could go to fill their pockets was astounding and almost unbelievable. It was the time the world was still slowly recovering from the cataclysmic shock of the 9/11 attack.

In 1994, France sold three Agosta military submarines to Pakistan for about one billion euros. Fifty million of these euros were set aside as commissions to be shared by some of Pakistan’s politically powerful figures of the time as well as military officers who had `managed` the deal. The group included the then Prime Minister Benazir Bhutto’s husband, Asif Ali Zardari, the then Naval chief, Admiral Mansurul Haq, his predecessor Admiral Saeed Khan, a former naval intelligence director besides some defence agents in Pakistan and other countries. The most notorious of them was Amir Lodhi, brother of a former Pakistani ambassador to the United States, and a close associate of Zardari.

What was the role of the Pakistan Army? This is what the Express Tribune, an English daily published from Pakistan, said in its editorial dated November 27, 2010, eight years after the incident: ‘On the home front, some things are obvious. An attack of this nature couldtake place only with the involvement of the military and the agencies. No one else is capable of enacting it. This is all the more true as it took place during the height of power of a military regime. As we have become accustomed to hearing at every turn, the name of the president has been mentioned. But it is questionable quite what part he could have played in a sophisticatedly designed terrorist operation while in exile and with no known power within the country.’

Since Zardari was living in exile at the time of the attack, he could not have masterminded it. So who did? The answer is hidden in a secret investigation report completed in 2008 titled ‘Nautilus’ which hinted at the involvement of ISI. A French daily Le Parisien, which published the story of the French investigations carried out by Judge Marc Trevidic into the attack, said the role of Pakistan’s secret services (ISI)  is “no longer in doubt”. In fact, the report linked the assassination of American Jewish journalist Daniel Pearl in January 2002 with the May bombing. The role of the Pak Army in the Pearl killing has long been established.

As the families of the killed French naval employees grieve year after year, demanding clear answers from their government in France, the Karachi attack was most compelling proof of Pakistan’s sponsorship of terrorism and terrorist groups as a state policy, a fact which the world deliberately ignored at great cost to global peace and order. (Courtesy The Times Of Israel)