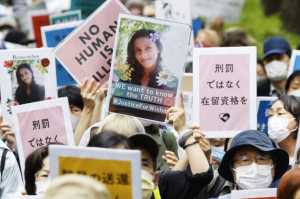 A criminal complaint has been filed with prosecutors over the death in March of a Sri Lankan woman who was being held at an immigration facility in Nagoya, central Japan.

Masaki Hirata, a Nagoya City University scholar and supporter of Ratnayake Liyanage Wishma Sandamali, accused an unknown person of failing to provide appropriate medical services to the woman despite her deteriorating health, according to the complaint, Kyodo News reported.

“As a citizen, I was heartbroken by the tragedy. I thought about what I could do to help and came up with lodging the complaint,” Hirata, an associate professor of international relations at the university, told a press conference.

Wishma, 33, died on March 6 after complaining of stomach pain and other symptoms from mid-January while being held at the Nagoya Regional Immigration Services Bureau in Aichi Prefecture.

The complaint also questioned the rejection of a support group’s request for the provisional release of Wishma so she could receive an intravenous infusion and other treatment.

Wishma, who came to Japan in 2017 on a student visa, was taken to the facility in Nagoya in August 2020 after it was found her visa had expired.

Critics have cited her death as evidence of the problems riddling Japan’s immigration and asylum system, particularly with regard to the indefinite detention of foreign nationals facing deportation.

Meanwhile, the Justice Ministry is yet to determine the cause of death and has turned down a request by Wishma’s family and supporters to release video footage showing her in the facility, citing security reasons.

Growing criticism over the alleged improper treatment of Wishma led the Japanese government to drop a bill for the revision of rules on how to accommodate foreigners facing deportation. (Colombo Gazette)