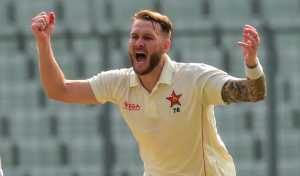 Zimbabwe fast bowler Kyle Jarvis has announced his retirement from all cricket after a year of illness and injury.

Jarvis battled a trio of illnesses – Covid-19, malaria and tick fever – earlier this year. At that point, he revealed that he wouldn’t be able to play cricket for up to six months. He last played in the first Test against Sri Lanka at home in January 2020, when he went wicketless in Zimbabwe’s 10-wicket loss. A back injury kept him out of the second Test and required significant rehabilitation.

“I hurt my back against Sri Lanka in a Test match beginning of 2020,” Jarvis said in a media interaction. “I managed to come back and become fit again and just as I was starting to come back into it I got that illness which set me back further. After the uncertainty of that, I needed to realise I had to start looking for something for life after cricket. It wasn’t that I didn’t think I could come back again, but I had my mind set to start something on the side.”

Fast-tracked into the Zimbabwe side after an impressive performance in the Under-19 World Cup in 2008, he made his ODI debut in the home series against Kenya in October 2009. Jarvis subsequently made it to Zimbabwe’s squad for the series against Bangladesh and South Africa, following which he was sidelined after a spate of injuries. His comeback to international cricket coincided with Zimbabwe’s return to the Test fold. He made his Test debut against Bangladesh in Harare in August 2011, where he picked up five wickets across two innings.

However, he left Zimbabwe in 2013 to play county cricket with Lancashire. At the time, Zimbabwe Cricket was experiencing one of its many financial crises, including delays in payments to players. Jarvis sought a county deal in the hope of financial security and soon established himself as one of the club’s most valuable players. As a result of the deal, he missed the 2015 World Cup and will end his career without having played in a fifty-over World Cup. Jarvis represented Zimbabwe in one T20 World Cup, in Sri Lanka in 2012.

In September 2017, he ended his Lancashire deal to resume his international career with Zimbabwe. Since then, he played 5 Tests and took 16 wickets at 25.12, including 7 for 98 in a match against Bangladesh in Dhaka in November 2018, and 25 ODIs, in which he took 31 wickets at an average of 27.96, significantly lower than his overall average of 36.00. “I felt my last three years of international cricket were my best,” he said. “I am very proud of what I managed to do at the end there.”

Although his form was on the up, and he has completely recovered from both the injury and the illnesses, the 32-year old said he had already made plans for an alternate career during the period.

“I made a full recovery from both. I train every day – in the gym, playing football or running. I can’t try and guess if I could play at the same level again. I think if put my mind to it, I could but I have made peace with my decision,” he said.

While Jarvis hopes to become involved in coaching, he also has several other business interests for the foreseeable future. “I’ve got a vehicle import-export business and a used car dealership here in Zimbabwe and I am starting a restaurant. It’s a bit crazy to be doing a restaurant in these Covid times but hopefully we can get it together,” he said. “And hopefully I won’t be forgotten that soon. I’d like to give back and be a part of Zimbabwe cricket in some capacity going forward.” (Courtesy ESPN Cricinfo)