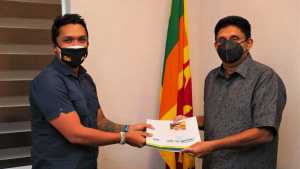 He was also appointed to the post of Social Development Secretary of the Leader of the Opposition Sajith Premadasa.

The letter of appointment was handed over by Premamdasa to Jayawickrama today (18).

Jayawickreme was this week removed as Chairman of the Weligama Urban Council.

A gazette was issued removing him from the post on a request made by the United National Party (UNP).

Jayawickreme had challenged a Court of Appeal dismissal of a petition he filed against the attempt by the UNP to have him removed from his post.

However, the Court of Appeal had last month upheld the decision taken by the UNP to expel a group of party members, including Jayawickreme, who had worked for the SJB while being part of the UNP. (Colombo Gazette)