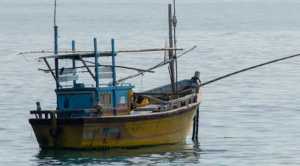 The Indian High Commission in Sri Lanka said that media reports on 17 June stating that a group of Sri Lankan fishermen were attacked physically by the Indian Navy are blatantly false.

“We deny any such incident having taken place. The Indian Navy is a highly disciplined and professional force which discharges its responsibilities in an impeccable manner,” a spokesperson at the Indian High Commission in Colombo said.

India says it is firmly committed to addressing all fishermen related issues between India and Sri Lanka in a humanitarian manner through established bilateral mechanisms and understandings.

Both India and Sri Lanka have failed to reach a permanent solution to the fishermen issue over the past several years.

Indian fishermen often poach in Sri Lankan waters and those detected are detained and later repatriated.

Similarly there have been few incidents of Sri Lankan fishermen being detected in Indian waters.

Following the spread of the coronavirus in India, the Sri Lanka Navy has warned and turned back Indians found poaching instead of bringing them ashore. (Colombo Gazette)