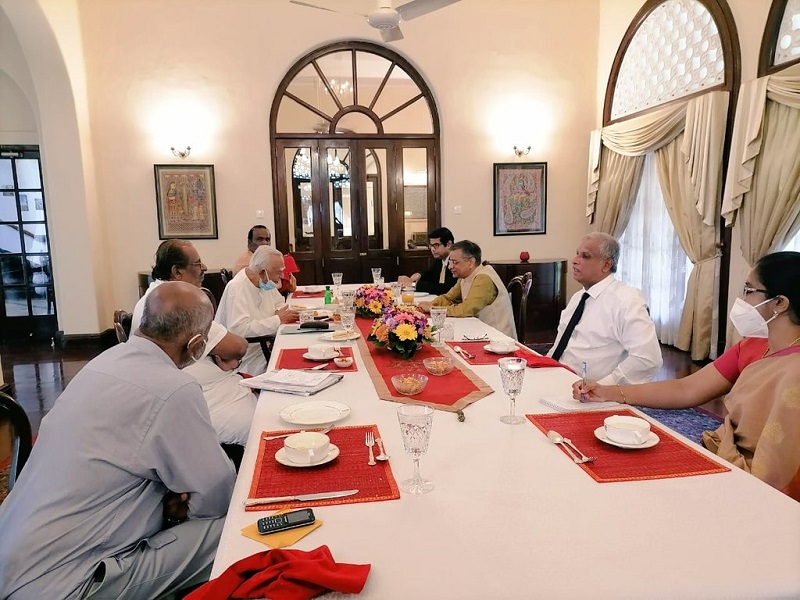 The Tamil National Alliance (TNA) today held discussions on the 13th Amendment to the Constitution with the High Commissioner of India to Sri Lanka Gopal Baglay.

The Indian High Commission in Sri Lanka said a five-member delegation, led by Leader of the TNA R. Sampanthan had met with Baglay at India House.

The Indian High Commission said the meeting saw talks being held on the development of the North and East of Sri Lanka and improving connectivity between the two countries in the post-Covid period.

The High Commissioner stressed India’s longstanding commitment towards creating social infrastructure such as housing in Sri Lanka that enabled all Sri Lankans including the people from the Northern and Eastern Provinces to enjoy the fruits of peace.

He reiterated Indian support for rehabilitation and development in areas such as connectivity, health, and education.

The Indian High Commission further said various aspects of devolution and developmental aspirations of the people from the North and East were also discussed.

The TNA delegation apprised the High Commissioner on progress regarding the Provincial Council elections which constitutes an integral part of Sri Lankan polity and Constitution.

The Indian High Commission said Baglay also reiterated India’s support for devolution within the framework of a united Sri Lanka on the basis of full implementation of the 13the Amendment which would be in line with Tamil aspirations for equality, justice, peace, and reconciliation and would strengthen Sri Lanka. (Colombo Gazette)