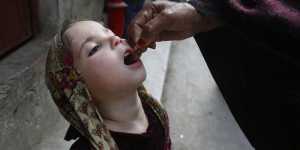 George Laryea-Adjei, the Regional Director of United Nations Children’s Fund (UNICEF) has said there are still hundreds of thousands of ‘invisible children’ who are susceptible to polio and must be vaccinated.

Speaking in an interview with Dawn on Friday, he said: “There is a group of children called the ‘missing children’ whose parents are refusing for them to receive vaccines for various reasons. They are not easy to find. They don’t go to schools or they don’t have birth certificates. These are the invisible children. There are quite a number of them.”

“They have to be invited. Where there is refusal, we have to understand their need and why they are refusing,” he added.

He said the message to the government was that the number of ‘missing children’ had come down but it was still high, while noting that the disease was prevalent in only two countries – Pakistan and Afghanistan.

Laryea-Adjei is currently in Pakistan and is visiting polio reservoirs in Karachi, Peshawar and Quetta. “Last year, the numbers were not good. This year we have seen just one case of the wild poliovirus compared to 54 the previous year. There is progress but the country has been there before,” he said.

The UNICEF official noted that the “disruption from COVID-19 made it difficult to find the invisible children, along with disruptions in schooling, child protection services at a time when children were under so much stress and their mental health suffered.”

“We understand that because of COVID, house to house is not going to be easy. It is important to continue to send the message that children have to be vaccinated. Vaccination must not stop. The consequences are not good if you refuse,” he told Dawn.

“Pakistan has one of the highest newborn deaths in the region. Every two minutes a newborn child dies. This shows there is something wrong in the system. If the right strategies are adopted, child mortality can be reduced. It concerns me a great deal,” he further said.

Laryea-Adjei further expressed concern on malnutrition in Pakistan, noting that stunted growth was again one of the highest in Pakistan at 40 per cent.

“If 40 per cent of your kids are stunted it means something is not happening. It’s a huge figure that stands out,” he said.

The UNICEF Regional Director must be assisted to learn skills for girls to delay marriages and for the younger generation to gain confidence, Dawn reported. (ANI)