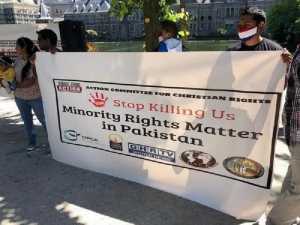 Action Committee for Christian Rights, that fights for the justice for Pakistani Christian girls held protest in front of the Dutch Parliament.

It called for overseas Pakistani Christian community of Holland and Belgium to raise voice against Pakistani authorities over the atrocities commited on minor Christian’s girls as they are kidnapped and raped.

Around 130 protestors which included Pakistani Christians and local Dutch joined the demonstration to highlight the issue of minor Christian’s girls and their plight in Pakistan.

Every year a large number of Christian girls, mostly minors, across Pakistan are abducted and forcibly converted to Islam to get married to Muslims.

Even police and politicians ignored their grievances and left the minorities to live a miserable life.

Despite many cases of forced conversions, the country till now has turned down two bills. The bills tabled in 2016 and 2019 demanded that the minimum age for changing one’s religion be set to 18 years, jail terms be sanctioned for anyone guilty of coercion, and a 21-day period in a safe house be mandated for the person seeking conversion to ensure that the decision has been taken out of the free will.

Despite international condemnation over Pakistan’s draconian blasphemy laws, which carry the death penalty, observers note that Christians continue to become common targets of discrimination of the laws.

One of the prime examples of the brutality of the blasphemy laws is the case against Asia Bibi, which then led to the deaths of former Punjab Governor Salman Taseer in 2011 and former minorities minister Shahbaz Bhatti for defending Bibi.

Earlier this year, the United States Commission on International Religious Freedom (USCIRF) designated Pakistan as a “country of particular concern” due to its worsening religious freedom conditions for Christians and other religious minorities.

The International Christian Concern (ICC) reported that at least 25 incidents of persecution against Pakistan’s Christian population between January 1 and March 31, 2021.

Pakistan was ranked as the world’s fifth-worst persecutor of Christians by Open Doors USA, a California based non-profit organization, in its 2021 World Watch List. (ANI)