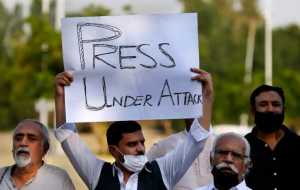 For some elements in Pakistan, it is not enough that I have been taken off the air. They want to see me behind bars. Last month, I was banned from appearing on the talk show I have hosted for two decades, “Capital Talk,” on Geo News. I was also stopped from writing my column in Pakistan’s most popular Urdu-language newspaper, Jang. Now I face the prospect of sedition charges. The maximum punishment under the law is life imprisonment.

My apparent crime was a speech I gave at a protest in solidarity with journalist Asad Toor last month. On the night of May 25, three unidentified men entered Toor’s apartment, tied him up and tortured him. It was the latest in a series of attacks on journalists in Pakistan’s capital, Islamabad. We know about some of the attacks, but most have not been reported.

Toor paid a price for his decision to speak out against his assailants. Within moments, he was accused of faking his wounds to seek fame. Pakistan’s information minister, Fawad Chaudhry, claimed that journalists stage the attacks to seek political asylum abroad. These remarks angered the journalists standing with Toor. For me, it was personal. It reminded me of the attempts on my own life, and how, after being shot six times, I was also accused of making it all up.

In my speech, I said that if the attacks on journalists don’t stop, we won’t remain silent. I didn’t name any individual or any organization, but my tone was harsh. I was quickly accused of maligning Pakistan’s top generals. A carefully coordinated campaign smeared me as a traitor on social media and, with suspicious haste, a flurry of complaints was filed against me around the country. Management of my TV channel informed me that I wouldn’t be able to host my show. They took this action without any court order or showing any notice of cause. Amnesty International, Human Rights Watch and the International Commission of Jurists denounced the pressure brought on media owners “to shut down critical voices.”

Pakistani journalism organizations decided to defend me in the courts, but they asked me to explain my position because I had spoke on their platform. I clarified that I never named anyone in my speech and I respect the army as an institution, but that I can’t remain silent on attacks against journalists. I even asked to be excused if my harsh tone caused any inconvenience to anyone, but reiterated my demand that attacks on journalists must come to an end.

In 2007, the then-military dictator, Gen. Pervez Musharraf, banned me for several months when he imposed a state of emergency. In 2012, a bomb was found under my car after I criticized the Taliban’s attack on Malala Yousafzai. I still carry two of the bullets inside my body from when I was nearly killed in 2014. After that, I faced allegations of blasphemy, but I was cleared by a court of law.

The attempt to charge me with sedition is part of a well-organized war on dissent in Pakistan. Journalists, human rights activists, politicians and academics have all been charged under the law. It is deliberately vague, and broad terms enable its abuse. You can be charged with sedition for merely “liking” a Facebook post, for drawing a cartoon or for making a speech. Two members of Parliament from the opposition are currently facing sedition charges. One, Mian Javed Latif, was recently released on bail. The other, Ali Wazir, has languished in a cell for the past six months.

The sedition law — 124-A of the penal code — is a 19th-century British instrument of colonial repression. It was used to arrest the father of India, Mahatma Gandhi, who famously said it was “designed to suppress the liberty of the citizen.” The founder of my country, constitutional lawyer Muhammad Ali Jinnah, defended journalists accused of sedition in court — and won.

Ironically, the same governments that pride themselves on their patriotism today remain beholden to archaic British traditions. In India, the Modi government has wielded the sedition law to target academics, lawyers, activists and students. In Bangladesh, Sheikh Hasina’s government has sought to silence journalists reporting on human rights violations and corruption. And in Pakistan, an attempt to finally rid us of the law was defeated last year by Prime Minister Imran Khan’s government in Parliament.

Alongside old draconian laws come new ones. The Pakistani government recently proposed a law to establish a body called the Pakistan Media Development Authority. It would have introduced media tribunals to decide what can and cannot be said or written, without notice or a hearing. Offenders would be punished by up to three years in prison and millions of rupees in fines. This law would enforce total silence in Pakistani media.

Journalists, lawyers and human rights activists all condemned the draft law with one voice. This new show of unity offers a ray of hope. If we all speak loudly and without fear, I’m certain that we will be heard. This is how our forefathers resisted British rule, and it’s how we’ll continue to resist the colonial mind-set that seeks to silence us today.

Hamid Mir is a Pakistani journalist and author