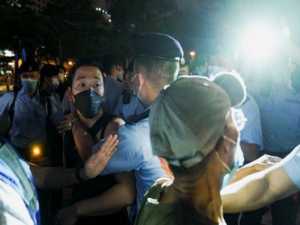 At least four people were arrested during demonstrations to commemorate the anniversary of the first major clash of Hong Kong’s 2019 anti-government protests.

The arrests were made on Saturday as Hong Kong witnessed muted demonstrations of small and scattered groups.

At about 9:30 pm, police entered Langham Place in Mong Kok after they found about 20 people shouting slogans they said “might breach the national security law”, South China Morning Post reported.

At least three males and one female aged between 15 and 19 were arrested for disorderly conduct in a public place and failing to provide proof of identity as of 11 pm. Ten others were issued summonses for breaching COVID-19 social-distancing rules.

Dozens of officers also cordoned off several streets in the Kowloon neighbourhood and conducted stop-and-searches.

Earlier, hundreds of police officers filled the one-time protest hotspot of Causeway Bay, blocking off streets around the Sogo department store, while others were stationed around the entrances of the three major cross-harbour thoroughfares.

On June 12, 2019, clashes erupted between police and demonstrators outside the Legislative Council after thousands of people protested against an extradition bill that was scheduled for its second reading in the chamber that day. The legislation was finally withdrawn months later.

The day was the first in which police fired rounds of tear gas and rubber bullets to disperse demonstrators, who had taken over a major thoroughfare, with some radical elements attempting to push their way into the Legco complex in Admiralty and hurling bricks at officers.

The clashes continued until midnight, and the day’s events would later be seen as a major turning point in the anti-government movement.

The pro-China authorities have adopted a heavy-handed approach in Hong Kong and have taken actions against demonstrators.

Meanwhile, the momentum of overseas demonstrations in support of the protest movement remained strong.

In London, crowds of black-clad protesters, including families with children, joined a march and chanted the now-outlawed protest slogan “Liberate Hong Kong; revolution of our times” and “Five Demands, not one less”. (Daily Hunt)