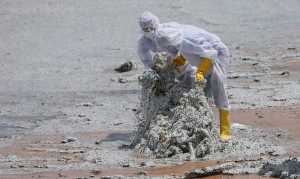 He said they arrived in the country yesterday and are currently at the site of the disaster assessing the impact on the marine environment of Sri Lanka.

When inquired on the impact thus far due to the ship disaster, Terney Pradeep Kumara said a specialist team from the MEPA is conducting an assessment at present.

He said the full impact on the marine environment of the country will be ascertained once the assessment is completed and a report is submitted in this regard.

The carcasses of several fish species, including dolphins, and turtles have washed ashore along the coastal belt of the Western Province following the disaster.

The MV X-Press Pearl vessel which was carrying hazardous chemicals caught fire following an explosion due to a chemical reaction. Several cargo, including chemicals, had toppled into the sea and washed ashore along the Western Province.

MEPA recently revealed that experts believe there is no bunker oil remaining in the ship, stating that they have received expert opinion that the oil may have burnt or evaporated.

The Criminal Investigations Department (CID) is continuing investigations into the disaster. The Captain of the vessel was arrested and released on a personal bail of Rs. 02 million recently.

The local agent of the MV X-Press Pearl vessel was also arrested by the CID and was later released on bail. (Colombo Gazette)