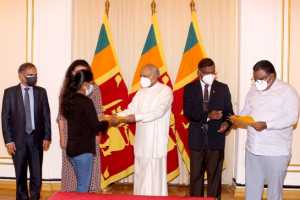 The Consular Affairs Division of the Foreign Ministry organized a ceremony to handover letters of compensation of the deceased Sri Lankan workers abroad to their respective family members.

During the Ceremony, Minister Gunawardena mentioned the activities carried out by the Ministry to ensure the safety and welfare of Sri Lankans working abroad.

Further, addressing the families of the deceased, Minister Guanawardena stated that although the loss of a person’s life is irreparable, compensation payments on behalf of the deceased workers would bring some kind of relief to the affected family members.

The Consular Affairs Division of the Foreign Ministry was able to secure the said compensation, salary dues and other redress with the assistance of the Sri Lanka Missions in Middle Eastern countries.

The payments were a result of initiatives and constant follow up action pursued by the relevant Sri Lankan Missions liaising with the respective authorities of the specific country. (Colombo Gazette)