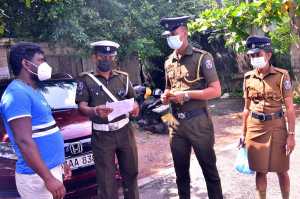 The Police today said that adhering to the regulations issued to prevent the spread of the coronavirus will help lift the travel ban on Monday.

Police Spokesman, Deputy Inspector General (DIG) Ajith Rohana said that, so far, it has been decided to lift the travel ban on Monday, 21 June.

He urged the public to strictly follow the regulations in force, including the travel ban.

The Police Spokesman said that a large number of vehicles were detected on the streets on Monday and yesterday.

As a result, the Police have further intensified operations to nab motorists taking to the streets with no valid reason or documentation.

The Government had hinted yesterday at the possibility of extending the travel ban on Monday 21 June.

Cabinet co-spokesman Keheliya Rambukwella said that the decision to lift the ban on Monday is not final.

Responding to a question raised on the travel ban, the Minister asserted that lifting the ban cannot be forecast.

He said that a final decision will be taken closer to the date based on the developments at the time. (Colombo Gazette)