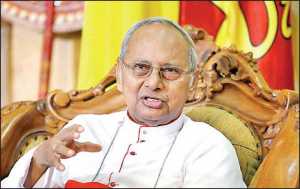 The Archbishop of Colombo, Cardinal Malcolm Ranjith, has slammed the timing of the fuel price increase.

Issuing a statement, Cardinal Malcolm Ranjith said that the fuel price hike should not have been implemented at a time when the public are suffering from the impact of the coronavirus and the fire on the X-Press Pearl ship.

The Cardinal said that the public have now been forced to face further suffering as a result of the fuel price hike.

He said that fishermen, who depend on fuel for fishing, are among those who have been severely affected by the travel ban and the fire on the ship.

Cardinal Malcolm Ranjith urged the Government to take measures to offer assistance to the people badly affected by the fuel price hike.

Gammanpila said that the decision to increase the price of fuel was taken after extensive discussions.