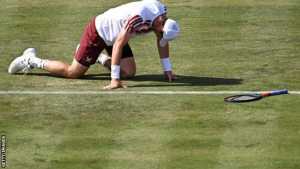 Andy Murray made an emotional and winning return in his first singles match on grass for three years as he reached the second round at Queen’s.

The Briton, 34, beat Frenchman Benoit Paire 6-3 6-2 in his first singles match since March after a groin injury.

Last year’s grass season was cancelled because of the coronavirus pandemic and he played doubles the previous year while on the comeback from hip surgery.

“Sorry,” he continued, shaking his head as he tried to contain his emotions while the crowd cheered.

“Obviously, competing is why you put in all the hard work.

“The last few years, I’ve not go to do that as much as I would have liked so, yeah [it’s] just great that I’m out here and able to compete again.”

Murray’s route back to action following a hip resurfacing operation at the start of 2019 has been bumpy at times. He has been hampered by injuries and bad luck – this latest groin injury was sustained in his sleep, while he missed the Australian Open in February after testing positive for Covid.

And while he is lacking tournament practice, the Scot was at least in very familiar surroundings at Queen’s, where he has won the singles title five times.

There will have been some hearts in mouths at the sight of Murray on his hands and knees after slipping on the grass in the third game of the match but he appeared to suffer no ill effects as he went on to break in the next game.

His movement to retrieve the ball and unleash a forehand winner down the line to seal the break was encouraging for those looking for signs of where the three-time Grand Slam’s fitness levels are.

And the roar with which he greeted it left no doubt that his passion for winning is as great as ever – and that was before his tearful on-court interview.

He grabbed a break in the fifth game of the second set with a cross-court backhand that touched the line by a matter of millimetres, and won the next three games in a row to seal victory.

“The body is old, but I did quite well today in terms of my movement,” former world number one Murray said.

“It’s my first match on grass in three years and I’ve only played three or four practice sets in the build-up to this, so I didn’t know exactly how I was going to play or feel – but I think for a first match it was good.”

Before his Queen’s return, Murray had not set any high expectations, focusing on his hope of being competitive and on his love for the sport.

But with his next match comes a true test of how well he can compete against the leading players.

Top seed Matteo Berrettini – the Italian world number nine – awaits in the second round and is a different prospect to Paire, who has an unconventional and erratic game and has spoken often of his struggles with motivation during the pandemic.

Paire had won only two of his previous 17 matches this year and so in some respects was a gentle test for Murray – even if he did get the Briton running with a series of drop shots – but Berrettini comes off the back of a run to the French Open quarter-finals last week.

“Berrettini is obviously a top player, top seed here,” Murray said. ” He had a really strong French Open. I need to play one level up from today if I want to do well there.”

Whatever happens in that match on Thursday, he will savour simply being there, saying he wished that 10 years ago he had been less stressed out focusing on his tennis.

“I just wish I had appreciated the small moments and stuff, like walking back on the grass court for the first time, like off the back of the clay season, just enjoying those moments,” he said.

“I’m always sort of telling myself, and maybe it’s not the best mindset, but each match could be my last one that I play now.

“I want to make the most of every match that I play and each tournament that I get the chance to compete in.” (Courtesy BBC)