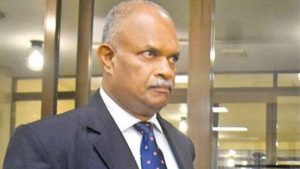 The Court of Appeal is to give an order tomorrow (Wednesday) on the revised bail application submitted by former Director of the Criminal Investigations Department (CID) Shani Abeysekara and Sub-Inspector Sugath Mendis.

The court heard submissions today of the two revision applications filed against the refusal of the Gampaha High Court to grant bail to Abeysekara and Mendis.

The cases were taken up on a motion urging for the cases to be taken up in open court due to urgency filed through the instructing attorney for Abeysekara, Gowrie Thavarasha.

When the cases were taken up, the court was informed that even after a specific court order on 19th May, the prison authorities had failed to submit a report on the medical condition of Shani Abeysekara to-date.

Counsel for Abeysekara pointed out that this showed how little the authorities cared for Abeysekara’s safety and wellbeing as well as insufficient respect for a court order, and that it strengthened the claim that he was in grave danger unless granted bail.

Court was shown a certificate dated 28th May from Specialist Consultant Physician Dr. Ananda Wijewickrema who had treated Abeysekara before, that he needed constant medical supervision and care, which if not done could cause serious complications that can endanger his life.

It was submitted by counsel that every day he was held in remand, Abeysekara is being exposed to great danger to his life and health.

The medical certificate had been obtained and filed on behalf of Abeysekara, after the authorities failed to send a report as ordered by the Court of Appeal itself. The court directed the court registrar to instruct the prison authorities to explain their failure.

Counsel for Abeysekara and Mendis submitted to court that under section 2 of the Bail Act which applies, the giving of bail is the rule and refusal the exception.

For court to refuse, there has to be real demonstrated reasons that are provided as acceptable to refuse bail under section 14 of the Bail Act. There has to be sufficient evidence to show that either the suspect would evade court, interfere with witnesses or evidence or obstruct the course of justice.

The burden of proving this was on the Police which they have failed to properly do, and were instead weakly speculating that such grounds exist.

Counsel submitted that the way in which the matter was being dragged on itself, showed the bad faith of the respondents and strengthened the case for bail to be given by the court.

Court was informed that in many cases overseas including in Australia and Canada, judges have now recognised that Covid-19 pandemic conditions are itself a ground for bail because it is an exceptional circumstance.

A previous Sri Lankan case where the appeal court had granted bail in similar circumstances was submitted to court on behalf of Abeysekara. It was emphasised that this whole exercise is an attempt to punish Abeysekara while crashing former DIG Vass Gunawardena’s conviction for murder by a trial-at-bar in the High Court that was now in appeal in the Supreme Court.

It was submitted that the facts are such that the treatment given to Abeysekara should shock the conscience of court. The law clearly doesn’t allow for refusing bail in a situation like this, it was submitted.

Counsel for sub inspector Sugath Mendis submitted to court that the only reason Mendis is in remand is that he refused to bow to pressure to give a false statement against Abeysekara to enable the authorities to charge him.

He said that as a Police officer with over 30 years of service, he couldn’t bring himself to give false evidence to court and wouldn’t lie about his superior officer, for which he is being made to suffer.

Both counsel urged that the action taken against Abeysekara and Mendis is part of a witch-hunt intended to help Vaas Gunawardena who had even threatened Abeysekara with death to escape justice and to help some connected people to rig the system and have revenge on Abeysekara for conducting some investigations as an honest Police officer.

Court was informed that both Abeysekara and Mendis were honourable Police officers of over three decades’ service, who have no desire to evade court.