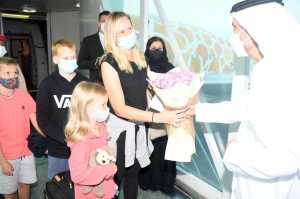 An Australian family of five has been reunited after being stranded in separate countries for nearly a month, The National reported.

The family were holidaying in Sri Lanka over Eid when new Covid-19 restrictions were put in place, meaning flights home were due to be suspended.

“We attempted to get out [of Sri Lanka], but the PCR tests didn’t come back in time,” the mother of three told state news agency Wam.

“So we were basically stranded there for the last three and a half weeks.
“We’ve been living here for 15 years, the kids were all born here. This is our home really so we really wanted to get back.

“Luckily we have a very good student here in Dubai, so they were doing some distance learning.”

The UAE authorities quickly responded and coordinated with authorities in Sri Lanka to facilitate the family’s return.

“We’re incredibly thankful and very excited to get home. To get back to the schools get back to our home and to their friends and normal life,” she said.

After arriving at Dubai International Airport, 40-year-old mother and her three children aged 11, 10 and 7, were received by a medical team so that they could take the PCR test.

“I’m really happy that I get to be in my home country, where I was born, and I’m so excited to get back to my house again,” said Levi, 10. (Colombo Gazette)