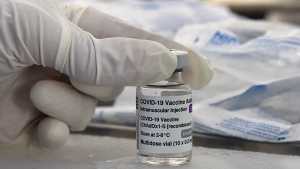 Sri Lanka is to study the possibility of using the Pfizer vaccine as the second dose for those who obtained the Covishield AstraZeneca vaccine, sources said.

World Health Organisation (WHO) Chair of Strategic Management Alejandro Cravioto had said that it has been found that the Pfizer vaccine can be given as the second dose for those who got the AstraZeneca vaccine as the first dose.

Officials in Sri Lanka are now studying the recommendation made by the WHO.

According to foreign media reports, in recent studies, researchers have found that this mixing and matching is actually beneficial, as a first dose of AstraZeneca combined with a second dose of Pfizer proved to develop levels of protection against the virus as high as two doses of Pfizer, with efficacy rates at 97 percent after the second dose.

The new guidance from NACI also advises that the Pfizer and Moderna vaccines can be mixed for first and second doses.

Sri Lanka is facing a severe shortage of AstraZeneca vaccines for those who got the first shot.  (Colombo Gazette)