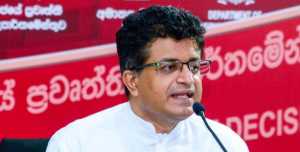 Allies of the Sri Lanka Podujana Peramuna (SLPP) have come out in support of Energy Minister Udaya Gammanpila over the issue on the fuel price hike.

Leaders of eight political parties in the SLPP issued a joint statement today condemning what they say is an attempt by SLPP General Secretary Sagara Kariyawasam to blame Gammanpila for the fuel price hike.

Kariyawasam had said that raising fuel prices at a time when the public are already facing difficulties as a result of the coronavirus is unacceptable.

He said that the Energy Minister must take responsibility of the situation and resign.

However, Gammanpila said that President Gotabaya Rajapaksa and Prime Minister Mahinda Rajapaksa and the Cabinet sub-committee on the cost of living, which includes Minister Namal Rajapaksa, had approved the fuel price hike.

Gammanpila also said that Kariyawasam did not have the consent of the party to call for his resignation over the fuel price hike.

He also said that a fuel price hike is a matter which comes under the purview of the Minister of Finance. (Colombo Gazette)

Chandima says the public know who the donkeys are

Rebel SLPP MPs complain to CPA and other organisations