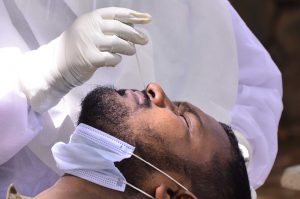 New Covid cases have been detected in the Colombo District including in Fort, Colpetty and Narahenpita.

The new cases were detected during a 24-hour period ending at 6am today (Monday).

Officials said that 338 people were detected with the coronavirus in the Colombo District during this period.

Among them, 14 people were detected with the virus in Fort, 18 in Colpetty, 24 in Narahenpita, 68 in Avissawella and 25 in Mount Lavinia.

Fresh cases were detected in a number of other areas as well in the Colombo District including in Homagama, Kotahena and Kosgama.

Meanwhile, 362 people were detected with the virus in the Gampaha District during the same period.

Officials also said that 339 people were detected with the virus in the Kalutara District, 322 in the Ratnapura District, 194 in the Kandy District, 104 in Kurunegala and 57 in Galle.

Sri Lanka has recorded a spike in Covid cases since the Sinhala and Tamil New Year in April.

The third wave of the coronavirus in Sri Lanka has been blamed over the failure by the public to adhere to the health guidelines during the Sinhala and Tamil New Year.

A number of areas in Sri Lanka have now been isolated to prevent the spread of the virus.(Colombo Gazette)