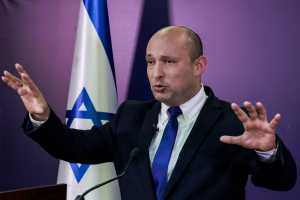 He said his government “will work for the sake of all the people”, adding that the priorities would be reforms in education, health and cutting red tape.

The right-wing nationalist will lead an unprecedented coalition of parties backed by MPs in Sunday’s 60-59 vote.

He succeeds Benjamin Netanyahu who was forced out of office after 12 years.

Mr Bennett, leader of Yamina party, will be prime minister until September 2023 as part of a power-sharing deal.

He will then hand power over to Yair Lapid, head of the centrist Yesh Atid, for a further two years.

Netanyahu – Israel’s longest-serving prime minister – will remain head of the right-wing Likud party and become leader of the opposition.

During Sunday’s debate in the Knesset (parliament) in Jerusalem, a defiant Mr Netanyahu promised: “We’ll be back.”

After lawmakers voted in the new coalition government, Mr Netanyahu walked over to Mr Bennett and shook his hand.

In his speech, Mr Bennett, 49, said: “This is not a day of mourning. There is a change of government in a democracy. That’s it.

“We will do all we can so that no-one should have to feel afraid… And I say to those who intend to celebrate tonight, don’t dance on the pain of others. We are not enemies; we are one people.”

Representatives of the Palestinians have reacted dismissively to Israel’s new government.

“This is an internal Israeli affair. Our position has always been clear, what we want is a Palestinian state on the 1967 borders with Jerusalem as its capital,” a spokesman for Palestinian President Mahmoud Abbas said.

“It is an occupation and a colonial entity, which we should resist by force to get our rights back,” said a spokesman for Hamas, the Islamist group that controls Gaza.