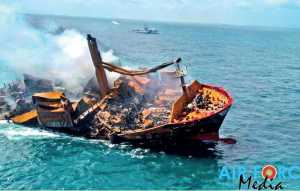 The captain of the ship MV X-Press Pearl, which caught fire in Sri Lankan waters, has been arrested.

The captain was refused permission to leave Sri Lanka as investigations into the fire were ongoing.

He was arrested by the Criminal Investigations Department (CID) today.

The captain was produced before a Magistrate who ordered that he be released on a Rs. 2 million personal bond.

The Magistrate also imposed a travel ban on the captain of the ship.

Meanwhile, the ship owners said that the MV X-Press Pearl is still unsafe as part of the forward section of the ship remains afloat.

X-Press Feeders, operators of the container ship X-Press Pearl said that no decision can be taken on future action with regards to the vessel until it becomes completely stable.

Andrew Leahy, a spokesman for the owners of the ship based in Singapore said that they are still monitoring the situation but cannot take any firm decision on the way forward.

Asked what steps the operators hope to take with regards to the remains of the ship, Leahy said that a conclusive decision has not been reached as the ship is still unsafe.

He said that the ship owners can only wait and see as they have been doing over the past several days.

Asked about the interim claim made by Sri Lanka, Andrew Leahy said that he had no comment as the claim would have been made to the lawyers of the company and the insurers.

Sri Lanka has sought an interim claim of $40m from the ship owners for the damage caused to Sri Lanka from May 20 to 1st June.

The vessel is fully covered under internationally recognised P&I insurance and Hull and Machinery insurance.

Meanwhile, X-Press Feeders said that as of Saturday evening observations from the salvors who remain on the scene with the Sri Lankan Navy and Indian Coastguard have not found any signs of a fuel oil spill.

The ship owners said that a grey sheen continues to be observed emanating from the vessel and discolouration of the sea has been apparent since the vessel’s stern became submerged, and the remnants of the cargo in the 1486 containers that were onboard were exposed to water. (Colombo Gazette)